You are here: Home1 / Barotrauma 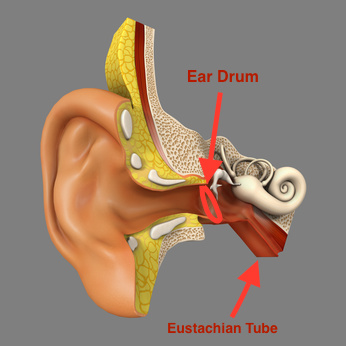 The volume of gas increases with altitude (reducing pressure) in keeping with Boyle’s Law. Boyle’s law states: The volume of a gas is inversely proportional to pressure (At a constant temperature). Gas is partially trapped in various body cavities such as the middle ear.

As an aircraft climbs or descends, there is a difference in pressure between the cabin altitude and the air in the body cavity.

What are the Symptoms of Ear Barotrauma?

Barotrauma affecting the middle ear is referred to as ‘Otic Barotrauma’ and is the most common type of Barotrauma. Air at an altitude of 8000 feet is around 30% greater in volume than the same amount of air at sea level. During ascent, the pressure differential across the ear drum causes the middle ear gas to expand, and vice-versa during descent.

Without equalisation of pressure between the middle ear and the cabin air pressure, the ear drums stretches and causes pain.

Otic barotrauma is graded according to its severity – the most mild form is pain without any signs, then earache with a red ear drum, followed by earache with bleeding on the eardrum, and finally perforation of the eardrum when the pain is immediately alleviated. Most perforations heal fine within six weeks.

How may ear Barotrauma be prevented?

Descent is a different matter. The air now needs to travel “against” the closed eustachian tube – from the nasopharynx to the middle ear. Action by the pilot is required to facilitate this process. The most common ways to equalise middle ear pressure are:

Barotrauma is most likely during desent. The altitude may reduce by up to 500 fpm without discomfort in most people – theat happens to be the same same rate of ascent or descent expected by ATC during a climb or descent instruction.

Pilots should perform the Valsalva Manoeuvre according to:

What medical conditions can get in the way of effective mddle ear pressure equalisation?

Equalisation of pressure may be prevented when a pilot:

Someone with a cold will probably not be able to equalise the pressures and is at increased risk of Otic Barotrauma. Pilots learn at an early stage of their flying training not to fly with a cold.

The valsalva manoeuvre will only work up to a maximum pressure differential of around 110mmHg which works out as roughly a change in (cabin) altitude of 4000 feet – don’t leave Valsalva too late or it won’t work.

What are the other types of Barotrauma?

Gas in other body cavities may also be affected: